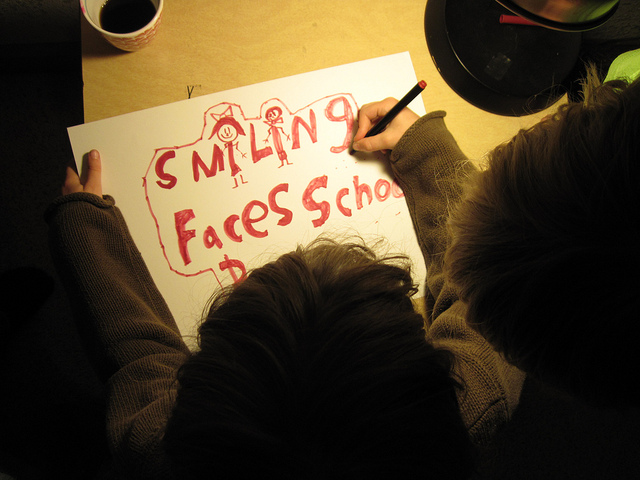 Just like I became the accidental stay-at-home mom, I’m starting to see the title of accidental homeschooling mom might not be that far-fetched.

Just like I laughed when my husband told me I should stay home with the kids full-time, I laughed (& maybe even gave him a triple stank face) when he brought up the idea of homeschooling to me almost two years ago. Seriously, that word just terrified me (and still does to a certain extent).

It’s hard enough being a SAHM, but to throw Homeschooler on top of that? It definitely makes me uneasy. But once I got over the fear of this huge responsibility, I started to really evaluate the advantages that we would have as a family.

This school year, we took a stab at preparing our 5-year-old for Kindergarten. Since he has a “late” birthday (September), he had to wait until this year to start.

So instead of keeping in pre-K for half a day, we (mostly me) decided to have him do two half-day programs. I figured this would get him accustomed to a full-day schedule come fall.

It’s actually proven to be somewhat of a grueling schedule, especially when my husband has to work until 10am. This means that I have to get all three kids up, dressed, fed and out the door to get our son to school by 8:50am. Throw in frigid temperatures or nasty weather and most times, he would end up missing his morning class.

I admit that the growing number of cases concerning bullying, harassment and school shootings terrifies me. When news broke out about Sandy Hook, it took everything in me not to keep my kids home from school the following day.

Being able to make our own rules

There is so much paperwork and so many rules and guidelines to follow when you register your child for school. I find it ludicrous that they actually sent someone to our house to discuss the absences of our 5-year-old pre-schooler.

Yes, he’s missed a lot of days (23 to be exact); a third due to a vacation and attendance of my brother’s out-of-town wedding, another third—probably closer to two thirds—due to sickness (wheezing, coughing, cold) and a fraction due to reasons mentioned above with my husband working late. Seriously?

He’s in pre-school, even though according to his teacher that’s been with him the last two years, he should actually be in Kindergarten.  But we didn’t make these rules so we don’t have any control over them.

Homeschooling would allow us to take care of our sick children without fear of being harassed and intimidated with possible jail time due to these ridiculous truancy laws. Ain’t nobody got time for that!

We are definitely still in the very preliminary stages of making any final decision. But this is a subject that we will be greatly engrossed in over the coming months, as we determine whether or not to keep our son home and test the homeschooling waters for his Kindergarten year.

Question: Are you considering homeschooling? If you already homeschool, what was the driving force behind your decision?