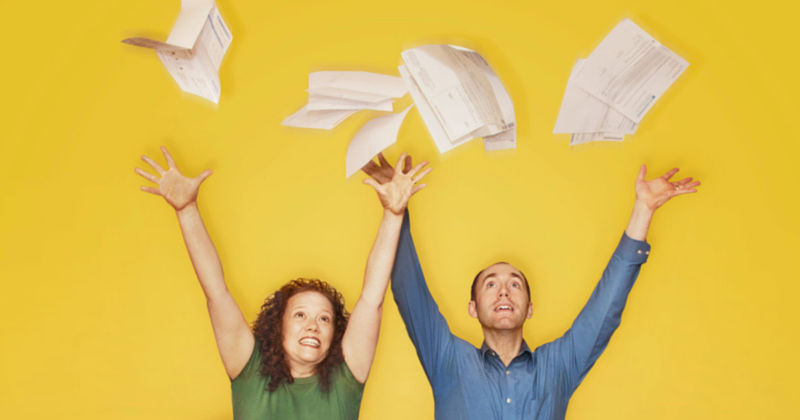 [guestpost]This is a guest post from Cherie Lowe. Since 2008, Cherie has been confidently wearing a plastic crown and encouraging others to dream big dreams. Together with her husband, Brian, Cherie paid off $127,482.30 in a little under four years. She scribed the ups and downs of their debt-slaying journey on her popular website, www.QueenOfFree.net. If you want to guest post on my blog, check out my guest post guidelines and submit your post.[/guestpost]

My husband Brian is a patient man. For more than two years, he cast the vision for our family to get out of debt. It’s not that I was ever vehemently opposed to the goal. I mean, who really ever says, “I think it would be swell to have $127K+ in debt. Let’s keep on doing that!”?

I just couldn’t see how it would actually be possible to pay off that much debt. Weren’t we already stretched as far as possible? Where would all of that money come from? And certainly we would be absolutely miserable in the process. Who wants that kind of grief in life?

To say I’m a strong-willed woman is an understatement. While I’d hate to admit it out loud in spiritual circles, I know I’m quick to speak, slow to listen. I’ve never been the fold your hands in the your lap and do whatever you’re told sort of girl. In some ways, it’s both my biggest strength and greatest curse. Let’s keep it real. It’s probably one of the reasons why my husband loves me most and also what drives him bonkers on a regular basis.

So what happened? How did I go from being in the jeering section to the cheering section? How did his words and actions convince me there was a brighter a future, a new bliss, and that financial freedom was actually possible? Here are three of the many ways my husband led our family from being broke as a joke to paying off $127,482.30 in less than four years.

[callout]You can purchase Cherie’s new book, Slaying the Debt Dragon, and learn how she and Brian paid off paid off $127,482.30 in a little under four years. It’s an amazing and inspiring story I think every couple should read, especially those with any amount of debt.[/callout]

I think anytime half of a couple is hesitant about paying off debt, there arises a temptation for the other individual to either nag to the point of death or create a forced choice. Spoiler alert: neither tactic is successful.

Brian first led our marriage and family toward a new financial awareness by his actions. He was the first to quit using the credit card. He made sacrifices by choosing to quit eating at restaurants for over 2.5 years. He took on two extra jobs and worked long hours. He never said, “This is what you will do and you will like it.”

Instead he made the most difficult decisions possible and then lived it with a smile on his face and joy in his heart. And he never required me to make the same choices.

Key in my husband’s vision casting approach was his ability to consistently paint of picture of what our lives would be like when we no longer had an albatross of debt hanging around our necks like a bad gold chain (you know, the kind that turns your skin green and leaves a mark?).

He beckoned me to daydream of where we would go, what we would do, and how we could bring change to the world. He placed in my path books that turned my soul inside out and Scripture that encouraged me on the darkest of days.

Sometimes we get money and marriage all backwards. We think that an effective spreadsheet or a phenomenal strategy will rock our finances. Honestly, paying off debt has much more to do with believing there’s a way out and dreaming of how awesome the future will be once we get there.

He Said I Love You (Again and Again)

Never once in our journey did I doubt that Brian loved me more than he loved eliminating debt.

He treasured me more than paying off the car.

He valued my soul much more than seeing student loan balances decrease.

He regularly spoke and wrote words of adoration.

He made sure that the kids went to bed on time so we could sit at the kitchen table and play Phase 10.

There were still date nights (even if they looked different due to a lack of resources). And our 10th anniversary was filled with detailed surprises and loving attention. I treasured this sacred time spent as a married couple that my thirsty soul ached for as we transitioned into a simpler lifestyle.

Things do not equal love but we each deeply long to know we matter to our spouse.

Clearly communicating love to your wife or husband just might be the strongest weapon against the debt dragon.

What lessons are you learning through the ups and downs in your marriage and family? Click here to join the conversation below.

[callout]You can purchase Cherie’s new book, Slaying the Debt Dragon, and learn how she and Brian paid off paid off $127,482.30 in a little under four years. It’s an amazing and inspiring story I think every couple should read, especially those with any amount of debt.[/callout]