A Dad’s Dream Come True: To Be Your Kids’ Hero 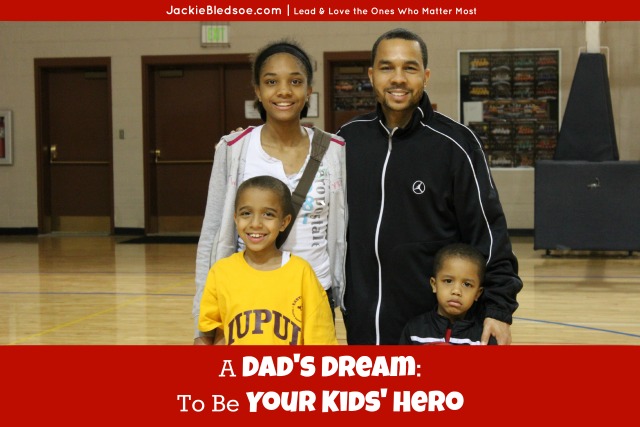 When I was growing up you couldn’t see the paint on my walls in my bedroom. Every inch of my walls were covered with posters, pictures from magazines, and even pictures from newspapers. I loved sports and you could tell the minute you stepped foot in my room.

One generation of heroes to the next

My walls were covered from corner to corner with Michael Jordan, Ozzie Smith, and Tony Dorsett images. Although I never said it, you could pretty much guess these sports stars were my heroes. I admired them, was inspired by them, and wanted to be just like them.

My kids are very similar to me in the fact they are “growing up sports” like me and my brother. My kids also are big Marvel comic fans, so they enjoy superheroes as much as sports stars. My boys even have pictures and “art” (pictures they’ve created and colored) hanging on their walls.

All dads want this

Most dads will probably never say it, but the best feeling in the world, and a dream come true is to be your kids hero. That dream came true for me last week.

I’m coaching my son, Jackson’s basketball team, and last week they were trying on uniforms and selecting jersey numbers. Each kid got to choose their own number. Jackson and one of his friends both said they wanted #3 at the same time. Of course they both couldn’t sear #3 so a decision had to be made. Somebody had to choose something else, or we’d have to decide for them.

Choosing more than a jersey number

Before it got that far, Jackson said, “no, I don’t want #3, I want #10.” So, cool situation resolved. I wasn’t sure why he first wanted #3, or why he later chose #10. I couldn’t think of any player who wears #10 that he was familiar with. Last I remember we were watching YouTube highlights and shooting videos of Stephen Curry, who wears #30. I originally assumed he’d go from #3 to #30, but he didn’t.

So, later I asked him, “who is #10, why did you choose that number?” He smiled big, and proudly said, “That’s your number dad.” I was shocked! Number 10 was the number I wore in high school the year we won the state championship. I had no clue he even knew my number. My playing days are very rarely, if ever, talked about in our house, and especially not my jersey number.

But what that meant to me was first, he noticed, and second he wanted to be like his dad. Very few kids say they want to be like their dad. They make pick up habits, and learn things from them. But when asked they’ll usually say someone they see on TV, in comic books, or playing their favorite sport. So that moment to me was a dream come true.

I later told my wife, half-jokingly, but really more serious that if it never happens again, or I never hear it again, I know for at least this season my son wanted to be like me, which means I qualify as his hero! BEST. DAY. EVER!

What would it mean for your kid to acknowledge in some way that you are his/her hero?