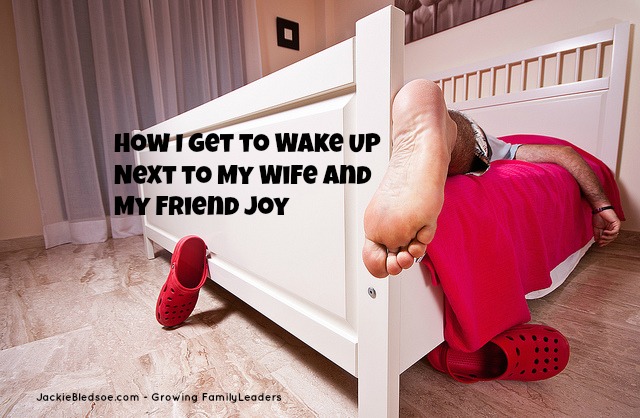 For the past few mornings, my wife has allowed me to wake up next to her and my friend Joy. Although my wife doesn’t really know Joy, she has no problems with our relationship. In fact, I would say she wants me to get to know Joy even more. My hope is they develop a strong friendship themselves. This would make my life, my wife’s life, and our family life better.

The early riser that used to be

I use to wake up early. I would wake up faithfully every day at 4:30 am, and be at the gym sweating by 5 am. At the time, I was working at a local fitness center. When I left that job I slowly, but surely, destroyed that good habit of rising early.

Of course, the habit didn’t just go away, it was replaced by a new habit. The habit of sleeping in, which I say is the cousin of being lazy. Since then I have been in a vicious cycle of trying to get back to waking up early, doing it for a little while, only to fail miserably while growing increasingly frustrated.

Have you found yourself in a cycle similar? Does it even matter if you wake up early or late?

What happens when you wake up early

I recently confessed to stealing from my wife and kids. One of the main reasons this happened was I was always short on time, or running behind due to not rising early. When you wake up early, you get a head start on the day. You can accomplish a lot before your family, or anybody else wakes up.

Rising early is the surest way to get more time out of each day. The early morning is also the most peaceful. It is the best time to clear your mind and fill your mind with Scripture, encouraging books, or inspiring music. Something to point your mind, body, and emotion in the direction of your ideal day.

Want success? Do what successful people do

One thing I have noticed over time, is many successful people wake up early. Three of the most successful entrepreneurs I know personally are early risers. The stories I’ve read about various leaders and influential people have revealed they habitually wake up early. There is a connection. Although I believed it and wanted it, I struggled. Until recently.

Successful people who wake up early

I’ve been reading a lot lately. And it just so happens that some of the authors of the books I am reading wake up early. Andy Traub actually wrote an entire book on it called, “Early to Rise,” which earned him $20,000+ in less than 90 days.

Jon Acuff in his books, “Quitter,” and “Start,” discusses “being selfish at 5 am” to work on your dream.  He suggests doing something you enjoy doing, something you love, something you are passionate about.  This habit has helped Jon become a New York Times Best Selling Author.

How Joy fits in the picture

I was desperate. I understood the need to wake up early. I knew each day, each week…my entire life would be different if I could go back to rising early. I would accomplish more, I’d be more refreshed, I’d have more time to spend on my dream, thus eliminating me stealing from my family.

I am currently going through Andy Traub’s book and 30-day challenge to rise early. I am doing everything he suggests in his book. Everything except naming my alarm clock Fred. I don’t want to wake up to anybody or anything named Fred in the morning!

But I do know what I do want to wake up to in the morning. Joy. I can wake up to Joy in the morning.  After all, as a Bible reader, I know that “joy comes in the morning.” So, my alarm clock is no longer my enemy, but my friend Joy. And my wife likes the fact I wake up next to her and Joy. As Jon Acuff says,

“Joy is an incredible alarm clock.”

Do you want Joy greeting you each morning?

I am embracing my early mornings and making changes. I want joy in the morning.

Early mornings, nor your alarm are your enemies. I encourage you to change your mindset. Embrace waking up early too. When you do joy will be waiting for you each morning.

Question:  What time do you wake up each morning?  How do you think waking up early can change your life?  Please share in the comment section below.