How Do I Explain This (Trayvon Martin Trial) to My Kids? 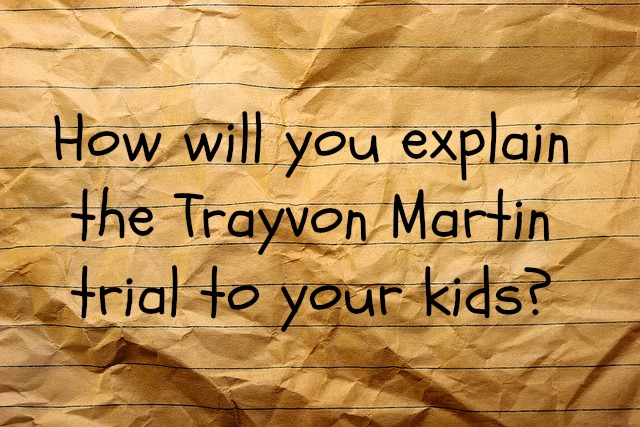 Not-guilty.  This verdict has many people sad, many people outraged, many people screaming for justice.  It has me confused, as well as concerned.  I learned of George Zimmerman receiving a not-guilty verdict the same time my kids learned of it.  Just like the people you see on TV my kids were frustrated, hurt, and confused by it.

They vented for about 10 minutes.  I sat and listened.  We haven’t talked about it since then.  I’m not sure what to say.  I don’t have an answer, at least one that can make some sense and good out of this situation.

What I could say

Almost 36 hours later, I am still wrestling with what to say.  I can tell them this is a reality in the country we live in.  That some people, who don’t know you, will view you a certain way, and you will have no control over it.  But the fear this could lead to their death is not a seed I want to plant in them.

I could tell them to be careful of their surroundings, don’t do anything that will bring negative attention to you, or that may make people label you and treat you according to that negative label or perception.  But the night he was murdered, Trayvon wasn’t doing any of that.

I can tell them that God is in control, which He is, and is the final Judge on what happened.  Yes, Trayvon was killed by a grown man, and this grown man is now able to walk free because some other adults said he didn’t violate any laws, but He will answer to God one day.   But I’m not sure this will bring any understanding or peace to what they are feeling.

In reality, I cannot explain this to my kids.  No matter what words I say, it just doesn’t make sense!

What I will say

I will talk to them about it, but I’ll be listening and learning more than speaking.

I’ll ask questions, and listen intently to their answers.

I’ll share my hurt and confusion, and assure them it is okay if they feel the same way.

I’ll also be prepared for the conversation to come up in the future, or never be mentioned again by them.

Finally, I’ll pray with them and hug them a little tighter than I normally do.  I’ll ask God to bring understanding.  I’ll pray for the Martin family, the Zimmerman family, and for this country.  And be hopeful God will bring some clarity, and mainly some peace to this situation.

What will you say?

You may have already had this conversation with your kids.  Maybe it wasn’t as difficult for you as it is for me.  Or maybe you decided you won’t say anything, as your kids are too young, too old, or something like that.  No matter where you stand, I need your help.  I’d like to hear how you are explaining this series of events to your kids.

What will you say to your kids?  How will you explain the fact a supposedly just system allowed a person who killed a kid to walk free?