Are You Teaching Your Kids How to Handle Success AND Failure? 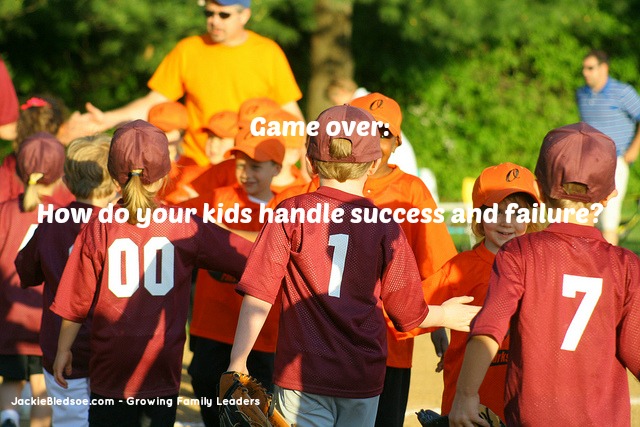 My seven year-old son and his team won the first tournament he’d ever played in last summer.  This year our team started right where we left off.

We won the first five games of the season.  We were all thinking…repeat!  Unfortunately that isn’t how the season ended, and I wasn’t sure how he would handle it.  We lost our first game in the tournament before regrouping and making it to the final four only to lose by one run.

Winning is easy, but that losing…

As we were playing this season I don’t think my son ever considered losing, or failure, as something possible.  The first season he played in, we marched to victory with no problem.  Season two we came out just as strong, post season success was sure to follow.  He handled success very well, but winning is easy.  I wasn’t sure how he would handle losing.

When I was his age I didn’t handle losing very well.  I had an older brother who I couldn’t beat at anything at that age, and I’d fight him, literally, when I lost.  Our three year-old does this now when he loses to our seven year-old.  The apple doesn’t fall far…

Can you be a champion when you win or lose?

Hopefully our three year-old learns from his older brother.  What I learned was he was a great champion when winning, and he also knows how to lose like a champion.

In my latest CoachUp blog post, I discussed the way my son and San Antonio Spurs Head Coach, Gregg Popovich, both former champions, showed us a great example of sportsmanship: how to lose like a champion.  Below is an excerpt of the post.

Last week the Miami Heat beat the San Antonio Spurs to win their second straight NBA title.  Most of the attention was on LeBron James becoming a two-time champion.

On the other side, the Spurs lost in the Finals for the first time.  Just the night before, my son and his little league baseball team had a similar experience.  Last year my son’s team won their tournament championship in what was his first ever tournament.

LOSING WHEN YOU ARE USED TO WINNING CAN BE HARD

My son had never experienced being eliminated from a tournament, just like the Spurs in the NBA Finals.  I wasn’t sure how he’d handle it.  In fact, I think in his mind every season was supposed to end with a victory and championship trophy for him.  But it didn’t, it ended with the other team celebrating as the players on our team had a look like, “wait, what just happened…is it over?”

Click here to read the full post, and to join the conversation taking place on the CoachUp blog.

Question:   How do you teach your kids to handle success and failure?