What Makes A Champion 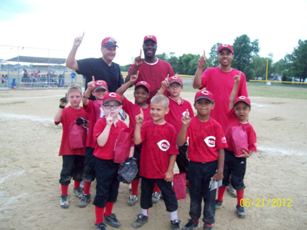 While everyone was getting ready to see if the Miami Heat could finish off the Oklahoma City Thunder in the NBA Finals, and get LeBron James his first NBA championship, my family was getting prepared for a championship game of our own. Our 6-year old son, Jackson, and his Junior Rookie Reds baseball team was playing in their league championship game.  That was the focal point of our day.

We won the game and the championship, in what I believe was the first baseball tournament championship for all of the kids on the team because in previous leagues (U5 and below) no tournaments were played.  I was one of the 3 coaches, and I have to say it was a pretty fun and amazing season.  All of the kids improved throughout the season and all of them contributed key plays to help us win games throughout the tournament.  As I reflect I learned somethings about “What Makes a Champion.”

Prepare, Give Your Best, Don’t Worry About the Outcome

Most kids at 6-years old you don’t have too many concerns.  Although the kids wanted to win the game(s), they didn’t seem to be as concerned as the parents and coaches.  My son and his teammates were prepared to be champions because they played and practiced throughout the season.  Yet I didn’t get the sense that the outcome of his game was a major concern.  The day of the championship game my son didn’t even realize he had a game until I told him to put his uniform on.

While he was happy-go-lucky and playing all day, we (parents) were a little different.  I drank out of the same bottled water each game (for 6 games), a Smart Water bottle that I refilled before each game.  My wife fretted over what colors to wear because she couldn’t remember what colors she was wearing when we last lost a game.  One of the coaches got to each game early to get the same “lucky” dugout.  Yet the kids showed what makes a champion by being  prepared, doing their best, and letting the rest take care of its self.

Our team started the season with 10 players, but before the 1st game we lost one player because he was initially placed in the wrong league.  Many games throughout the season we played with 6 players (it takes 9 to play baseball), yet our team continued to win games and have success.  We played all but one of our tournament games with 8 players while the other teams had 10-11.  This is a huge difference because at this age all players play in the field, so the other teams could cover all positions and then some, while we couldn’t even cover the basic positions.

None of that matters when you are champion, as you make up for any areas you are lacking.  In four of our six tournament games we had to come from behind to win.  The kids never gave up.  They continued to play, play hard, and play well.  They didn’t make any excuses.  They continued to listen to the coaches and parents, and continued to make plays and win games.

Know Who You Are

Before the championship game, my wife told our son that he was already a champion, and the outcome of this didn’t matter.  I agree, and I also believe that belief is what leads to championship level play.  You are a champion in private before you are one in public.

You have to believe in yourself, trust your teammates (family or co-workers), and expect the best outcome. I have said before that our son’s heart is half the size of his body.  The integrity, the work ethic, the positive attitude, the humility, all work together to make a champion.  From the time I worked with these kids through the end of the season I noticed pieces of that in all of them.

Do You Have What Makes a Champion?

I encourage you to take a look at yourself, your family, your business, and see if you possess the things that make a champion.  If you don’t, this can be your blueprint.  If you do, continue to show others by example what makes a champion!

Question: Have you had a great winning/championship experience, or accomplished something major in your life?  Would you agree/disagree that what I’ve said helped make that possible? Please share in the comments section below.