In marriage, you go through good times, bad times, and ugly times.  Sometimes it is hard to keep from generalizing your entire marriage based on a particular experience.  We have to remember to keep those times in perspective. 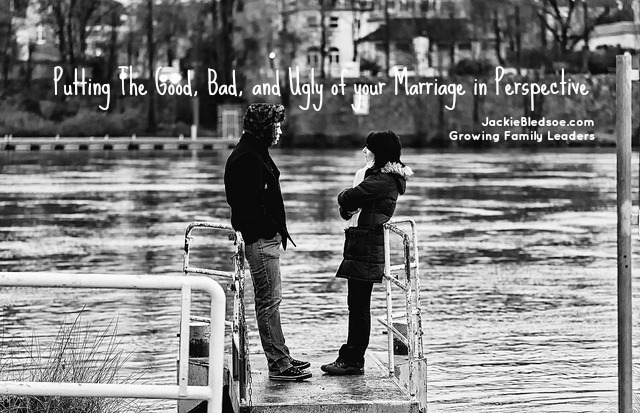 When you have a bad or ugly marriage experience you may find yourself using superlatives.  “He always”…”she never”…”this is the worst.”  That is dangerous ground.  Dangerous ground leading to you not appreciating the good in your marriage and life.  I was there this week.

Preparing to be filled after reaching “empty”

Tuesday morning, as we were preparing to leave home, my wife and I had a disagreement.  Let me be real, it was a full blown argument.  Raising voices, laying blame, all of that.  We were leaving in separate cars (not due to the argument), but going to the same place.

We left pretty angry at each other, well, I was actually really ticked off.  To add to it we were late, and we had to open the building, so people were expecting us to be there.

Both vehicles needed gas, but the one I was driving was past “E.”  I left a minute or two before her to get gas.  As I pull up to the pump, I hear “daddy.”  Apparently my wife had followed me.

She rolled down the window, had our daughter call my name, and my wife asked if she should get gas.  I snapped back, “No!”, and waved my hand for her to go ahead. You guys can beat me up later for not following my own advice here.

An encounter to put it in perspective

Immediately after that a guy came up to me.  He had a mask on that covered everything but his eyes, and one of his eyes was covered with an eye patch.  He was dressed pretty ratty.  His clothes were dirty, and torn in places.  And he was driving a moped in 30 degree weather!

He introduced himself, as Leon, and told me he was driving to a job interview on the other side of town but had no gas.  Remember, I am already ticked off, and had just hollered at my wife.  I was thinking, “dude, I do not have time for this…and don’t be rolling up on people like that!”

I had not checked our bank account and wasn’t even sure if I had enough funds in our account to get gas for our cars.  I told him that.  I said if I have enough money after putting gas in my car, then I’ll see if there is enough to put some in yours.

He began to share his story, and I began to ask him if he had a relationship with Jesus Christ.  His story made my argument, anger, and issues pale in comparison to his.

He had a past drug problem, an illness which led to him losing his eye.  He of course was broke, but had this opportunity to get a job to help.  His mother had recently passed, but he shared that she accepted Jesus Christ before she did.

After pumping my gas, I filled his tank his not even sure if it would clear my account.  I prayed with him, and we went our separate ways.

Thankful for the man on the moped

I may never see him again, and I cannot verify his story.  But I think our encounter was just as much about me, as it was about him getting gas money and prayer.  When I left, my attitude took a complete 180 degree turn.

Before, I was angry with my wife, using superlatives, and just making more out of the situation than was necessary.  As I reflected upon it all, a few things came to my mind about perspective in our marriage.  These three things can be helpful for all our marriages.

1) Our marriage is on display

Marriage is the most private public thing there is.  Meaning, many of the things we do in marriage are done behind closed doors and personal to our own marriage.  Yet, the fruit, the results, are shown in full view to those we cross paths with.  Leon probably wasn’t the only person who seen my interaction with my wife.  Fortunately he didn’t let it stop him from approaching me.

2) Our marriage should be viewed through a wider lens

At the time I crossed paths with Leon, I was viewing my marriage in a very narrow lens.  The lens of the argument we had just had.  All my actions were following suit.  Had Leon not been looking so rough, I might have snapped at him.  His appearance had me being a little cautious initially.  But after our conversation I began to look at the big picture.  Our marriage and our situation didn’t look so bad.

3) There is purpose to everything in our marriages

I am not sure the argument we had was purposeful in the encounter with Leon.  However, I know each experience gives us an opportunity to grow.  Each experience provides us a chance to display something good with our marriage.  We don’t always know what that is, but keeping this perspective will help us to handle good, bad, and ugly experiences better.

Question:  Have you had an experience which helped you understand some of the bad and ugly in marriage is not really all that bad?  Please share your experience in the comment section below.

4 thoughts on “Putting The Good, Bad, and Ugly of Your Marriage in Perspective”