I Had a Massive Heart Attack Called the “Widow Maker” 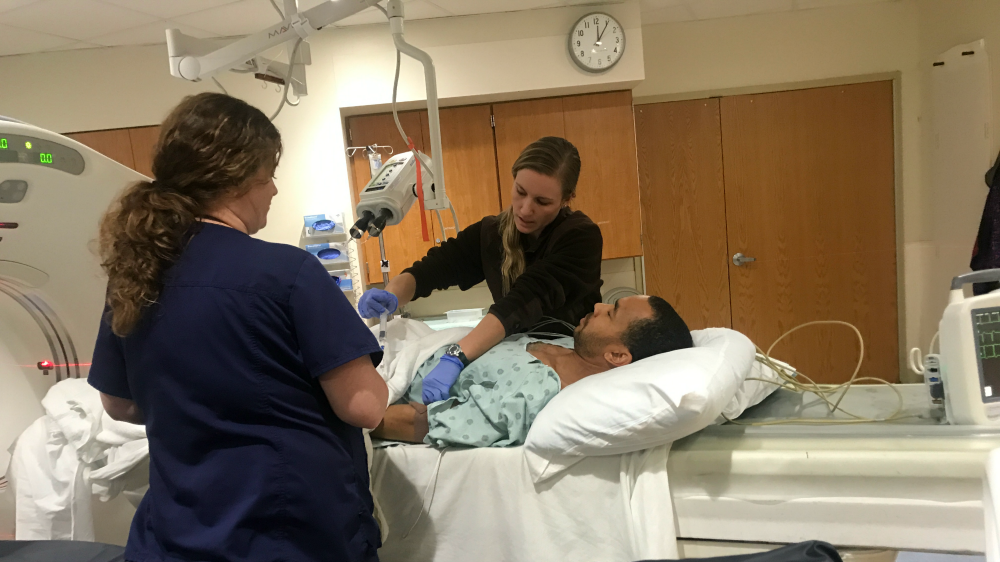 [callout]This post is the first of three that I will use to tell the story of the massive heart attack I had on Thanksgiving Day (2018). Over the next two weeks, I will continue to share my story. Stay tuned for Parts 2 and 3…[/callout]

It is still surreal to say (or write) those words. But it’s true, it’s not a typo. It’s not clickbait — it’s real life for me and my family. On Thanksgiving night, I had a massive heart attack and I’m so grateful that I’m here to talk about it.

This is probably a shock to you. It was to me, to my family and friends, my doctor, and even the cardiologist who saved my life. The cardiologist actually told my wife that he was perplexed.

He said he was looking at this physically fit young man who didn’t fit the description of a heart attack patient. And he even said the numbers from the tests I had in the ER could not definitely indicate a heart attack was happening.

But it was, and in the doctor’s words it was a type of heart attack called the “widow maker.” It’s called the widow maker because 60% of people who have this heart attack die. He told us that most don’t even make it to the hospital and many die on the table right in front of him.

I’ve never had a history of any health issues. Never had high blood pressure. Never been on meds for anything. Shoot, the only medicine I’ve taken in the past 15-18 years has been Children’s Benadryl for allergies. And I only did that in extreme situations.

I’ve never had any medical tests or health records indicate I had any type of health risks, let alone the possibility of a heart attack. I don’t smoke or drink. My diet isn’t perfect, but I don’t eat fast food, fried foods, red meat or pork (other than bacon–of course!–and pepperoni).

I’m the ideal weight for someone my height. I’m only about 10-15 pounds heavier than my college basketball playing weight. I run and play basketball from time to time as well as coach 7th and 3rd-grade basketball teams so I’m still fairly active.

How in the world could this happen? How does a 43-year-old man with no red flags have a massive “widow maker” heart attack?

I don’t know. The doctors don’t know. Nobody knows. What I do know is I’m grateful to be here and I now have a perspective on life like never before.

I think about it frequently

I’ve rehashed it in my mind, had countless conversations, and listened to my family talk about what happened the night of my heart attack many, many times.

It doesn’t get any less shocking or surreal, and it doesn’t fail to overwhelm me with gratitude or praise for God any less each time I “relive” it.

People often want to know what happened that night, so I’m thinking if you’re reading this you may want to know as well.

One thing I believe is that my heart attack can be a warning sign to you and your loved ones. It can be a life-saving blessing if it helps you become more aware, make changes, or even make that 911 call instead of dismissing something that doesn’t feel right.

Every year on Thanksgiving we visit with “framily” (friends who love us like family — my wife coined that phrase). This Thanksgiving was no different, other than us getting there later than normal pretty much as the prayer was about to happen and the food was about to be served.

We ate great Thanksgiving food, fellowshipped, watched football, and just enjoyed each other. I actually ate less than I normally do. I normally eat at least two plates and some sort of dessert.

But this time I was done after eating one plate. I knew I wasn’t going to eat again. I didn’t feel terrible, but I didn’t feel great. I just wanted to find a place to sit, and I did. I literally sat in the same seat from the time I got up from eating around 4 pm to around 11 pm that night.

As I think back I had a “full belly” feeling like I’d not felt before, at least not after eating only one plate. So I sat, talked, watched football, even filmed some videos of our framily’s new baby girl fighting sleep.

Realizing something was wrong

Then around 10:30 or 11 pm I got up to play a game with everyone (the game was Heads Up using an iPad). I remember quietly hoping I wasn’t asked to be the person to hold the iPad and guess the word. I still felt that full feeling and was tired.

Finally, my wife and I started to make some moves toward leaving and began to help clean up. I took a couple of empty foil pans to the garbage and took one pan of food upstairs to the kitchen.

That’s when I felt something in my chest that wasn’t right. It was a tightness and a very, very uncomfortable feeling, sort of like I was out of breath. I thought I may need to use the bathroom, but someone was in the half-bathroom near the basement steps.

I was feeling a little disoriented and like I didn’t have the energy to go ask where another bathroom was. I called to my wife from the top of the stairs. She just happened to be at the bottom of the stairs. I told her my chest didn’t feel right and I thought I needed to sit down.

I found a room off the kitchen where nobody was and took a seat. Stephana followed me and asked what was wrong. I don’t remember what I said, but it must not have been good as she asked if she should call 911. I immediately said yes. She knew for sure something was wrong as I’ve never answered “yes” to calling 911 for me.

It just so happens that one of the “framily” members in the house is a Registered Nurse (which was a God-send as she was not even expected to be there that night as she had just gotten off a plane that evening). Stephana went to get her and she was one of my “first responders.”

She noticed I had no color and my eye was drooping. At that point, Stephana had considered driving me to the hospital. That probably would have been fatal. The RN told Stephana she needed to have the ambulance come and get me.

All the while I was feeling increasingly worse. My family and friends told me to sit down and just relax as much as I could. That was hard as the feeling in my chest would not allow me to be comfortable in any way.

Help was here and on the way

Another God-send was there was also a fireman in the house, who was the second of my first responders. He had a blood pressure device and began taking my blood pressure and heart rate. All of this all valuable info when the EMTs arrived.

So, I’m having a massive heart attack and there happens to be an RN and fireman in the house. God definitely had His hand on me that night.

Once the EMTs arrived, which seemed like forever and very quick all at the same time, they gave me some aspirin and Nitro and rechecked my vitals. Nothing helped and they quickly made the decision to take me to the ER.

We chose our normal hospital, which was about 20-25 minutes away. Once they loaded me into the ambulance they asked if we had to go to that hospital. With about all the energy I had, I said: “whatever is nearest and fastest.”

This blog post is much longer than I planned (and much more emotionally writing it than I expected). I’ll continue sharing this story in my next blog post. Be sure to share this post as I believe it could help others who may or have experienced something similar.

[reminder]Have you ever been in a situation when you knew God was taking care of you in a special way? When have you felt God’s hand on you in a time you needed it the most?[/reminder]

[callout]Over the next two weeks, I will continue to share my story. Stay tuned for Parts 2 and 3…[/callout]