Comment2 | Share | Tweet | print | email
This is a post I wrote for the CoachUp blog about that “unique quality which separates great coaches from good coaches.” I wrote the post after attending an event featuring Tony Dungy and several of his former players. The same quality Coach Dungy has is also the same quality great family leaders have. 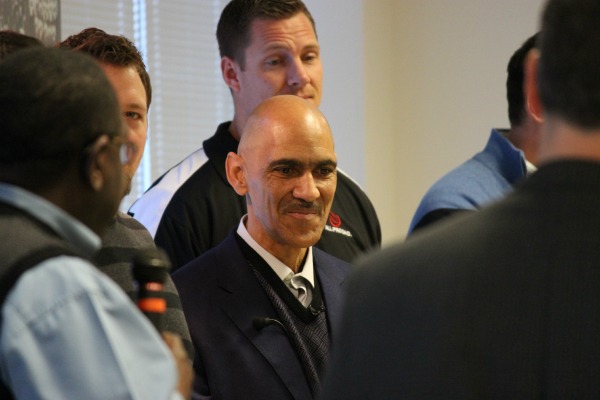 I’ve written about the important role youth coaches have in the lives of youth athletes. The influence goes well beyond the field, the court, or the arena. Anyone who has had the experience of playing for a great coach knows exactly what I’m talking about.

I was told by a YMCA director that years from now the kids I coach today will still call me coach, and I have the opportunity shape their lives. I’m been coaching kids for over nine years, and I’m not sure if our paths will cross when I’m older, but when they speak of me I hope they are able to speak well.

More than a coach

I attended an event last week in Indianapolis put together by the All Pro Dad organization to celebrate the 100th All Pro Dad’s Day breakfast at Cathedral High School in Indianapolis. The featured speaker of the event was Tony Dungy, and several former and current NFL players were in attendance.

Some of the players in attendance played for the Colts Super Bowl winning team a few years ago. These players were given the opportunity to share some of their thoughts and experiences playing for Coach Dungy. Very few of them talked only about their on-field player to coach relationship with him. Most of what they shared extended beyond that.

Click here to read the rest of the post, and to watch the video I recorded of Coach Dungy’s players sharing their experiences.

2 thoughts on “That Unique Quality Great Family Leaders Have”