One Surefire Way a Man Can Win His Wife’s Heart 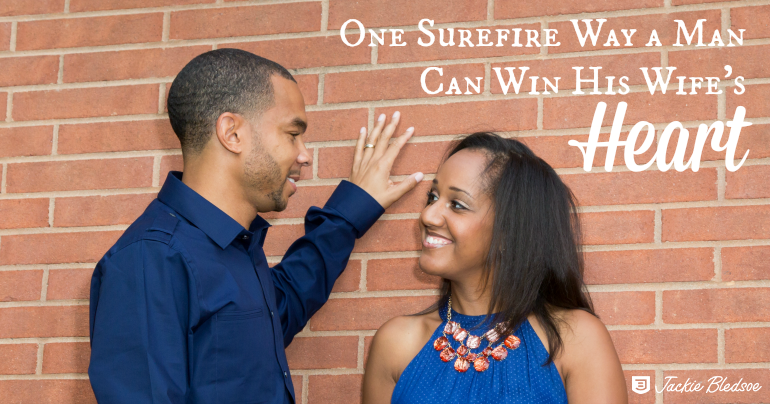 [callout]This is a guest post from Christy Fitzwater. Chrysty is a writer and pastor’s wife in Kalispell, Montana. She has enjoyed 24 years of marriage and is soon to enter the empty nest years, with a daughter who is married and a son about to graduate. Read Christy’s devotional writing at www.christyfitzwater.com. You can also find her on Twitter. If you want to guest post on my blog, check out my guest post guidelines and submit your post.[/callout]

His birthday falls on election day, and the year before had been the election of the “hanging chads.” Do you remember watching the news and waiting for hours to see who would be the president that year?

Of course, I made the mistake of hosting my husband’s birthday dinner at a restaurant with TVs. He was consumed with the news, and that birthday was a wash.

So the next year I decided to throw him a surprise election day party.

We had friends dress up as secret service, in black suits, sunglasses, and “ear pieces.” They picked him up for an escort to the party house. A friend decorated with bunting and all things red, white, and blue. All the guests wore a button that said, “I Voted for Matt.” The dress was formal attire only.

We live in Montana, so that meant most of the guys wore their good jeans.

But I went all out, in a strapless, red, satin dress. I applied eyeshadow and mascara. Then I paid way too much money and spent almost two hours getting an up-do by my hairdresser. If I do say so myself, I looked good.

After enjoying refreshments, which included sparkling cider in stemware, we gathered in the living room to give Matt his gifts.

When he had opened all the presents, I had everyone raise their glasses for a toast. Standing next to him in my ball gown (actually an old bride’s maid dress on loan to me from my sister-in-law, but you can use your imagination), I said these words:

Today I feel strikingly beautiful, but it’s not because of this dress. It’s because every day of our marriage Matt has made me feel beautiful. He is a man who knows how to make a woman feel special, and I’m glad he’s mine.

Up went the stemware, and we drank to that.

The way to her heart

I think back to all the days when the only shadow on my eyes was in the form of black circles hanging underneath. When my hair was tangled and I was in desperate need of a toothbrush.

He told me how beautiful I was then.

I remember the times when I wore baby-spit-up on one corner of a t-shirt instead of a red satin gown.

He told me how beautiful I was then.

And there was just the other night, when I was taking this 46-year-old body to bed after a long day of work.

Look at your hair, he said. It’s so long and beautiful. You’re pretty.

He makes it valuable to keep flirting with him, more and more as we approach our 50s.

The fire just keeps getting hotter, and he stokes the flames with the way he speaks about my looks. Believe me when I tell you that we have what you want in your marriage.

[reminder]How will you remind your wife she is beautiful today?[/reminder]