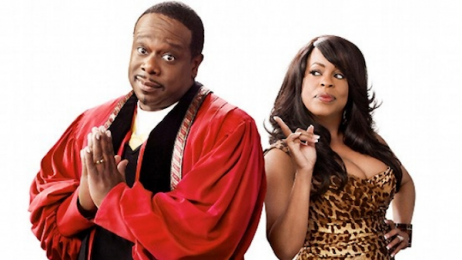 I’ve written about the term ‘domestic sexy‘ before. Well, thanks to a referral from a friend of mine, I’m hoping more people begin to hear about. Perhaps you will even hear a ‘King of Comedy’ use it on a TV show this season.

If you don’t know about ‘domestic sexy’ you better ask somebody!

For those who aren’t familiar with the term ‘domestic sexy,’ it is something I picked up from some good friends of ours.  The term refers to a husband who helps his wife with the domestic duties around the house.  In being domestic and helping his wife, it makes him sexy to her.  Thus, you get the term, ‘domestic sexy.’

I will be honest, I am probably more domestic unsexy than domestic sexy, but I am working on it.  Recently, I had the opportunity to interview, Cedric the Entertainer and Niecy Nash, who are co-starring in Season 2 of their TV Land sitcom, The Soul Man.

The interview opportunity came from my blogging buddy Eric Payne, aka EPayneTheDad.  Eric, who was voted a Top 50 Dad Blogger by Disney’s Babble.com, blogs at MakesMeWannaHoller.com about real stories of fatherhood, marriage, and life.

During the interview with Cedric and Niecy, I brought up the topic of being a domestic sexy husband.  Below is an excerpt of my post from MakeMeWannaHoller.com:

As with everything Cedric and Niecy touch it is sure to make you laugh.  During the interview, it was hard to keep from laughing.  Although you’ll be laughing while watching the show, you will also appreciate the fact that they are representing a couple that truly loves each other.

Below is a trailer of the new season.  In the video, Lolli (Niecy Nash) talks about what it does to her (and her lady parts) when Boyce (Cedric the Entertainer) helps out around the house.  This scene prompted me to ask them if the same happens in their real life marriages.

Through this question, I introduced Cedric to a term I’ve written about before, “domestic sexy.”   Domestic sexy is what you call a husband who helps his wife around the house.  He is being domestic, and that makes him sexy to his wife.  Watch the clip and see what Cedric and Niecy have to say below.

If their responses are any indicator of how the new season of The Soul Man will be, then you are in for a great season!

Question:  If you knew without a doubt, being domestic sexy would impact your sex life, what is the first domestic sexy thing you would do?