Is it Okay to Fight in Front of Your Kids? 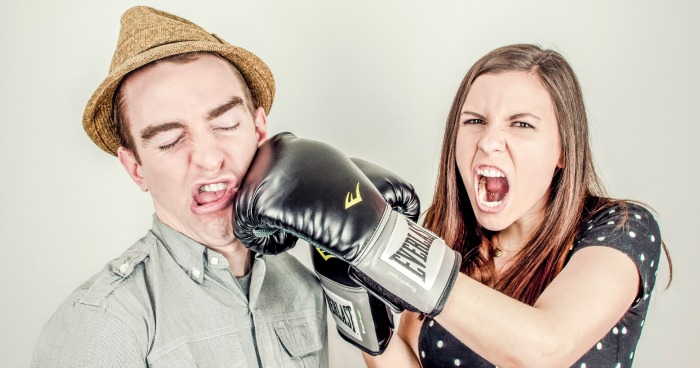 [callout]This is a guest post from Jonathan Hoover. Jonathan is the author of The Blindfolded Marriage and the associate pastor at NewSpring Church, in Wichita, KS. Jonathan is a sought after marriage coach and speaker and blogs at www.lifeinacrazyworld.com. You can connect with Jonathan on Twitter and Facebook. If you want to guest post on my blog, check out my guest post guidelines and submit your post.[/callout]

Marital conflict happens. Hopefully, we’re able to keep it to a minimum, but disagreements—sometimes heated ones—are bound to happen. Should we be careful about how much our kids see? For years, the cultural answer seemed to be “Yes; keep the kids out of it.”

But now, I’m talking to many couples who are thinking maybe it’s not so bad to fight in front of the kids. After all, they reason, isn’t shielding your kids from the realities of the real world a bad thing? Shouldn’t they get comfortable with what conflict looks like so that they won’t enter marriage with unrealistic expectations?

How are you at conflict resolution?

To figure out what’s best for your family, ask yourself this question: Do you think you and your spouse set a good example for discussing and resolving conflict? If so, then awesome. Your kids will probably learn a lot of helpful lessons from watching you and your spouse work out disagreements. If not, it might be better to be cautious about fighting in front of the kids. Here are a few reasons why this is true.

Studies have shown that kids’ ability to cope with stress, and even their ability to develop cognitively can be hurt when they are exposed to significant conflict in their homes. In some cases, children even behaved aggressively as a result of the extreme emotion they felt after witnessing the fight.

It’s clear from the studies that aggression or extreme tension between parents leaves kids overwhelmed, frightened, and searching for an outlet for their extreme but undefined feelings. Children are built by God with the need for a sense of security in the home, and that sense of safety takes a pretty substantial hit when conflict turns ugly.

What will they learn?

It just doesn’t pay to model a behavior for our kids that we don’t want them to learn.

Your kids look up to you as an example of how to function in relationships. If you don’t believe me, take a look at the many ways your parents’ relational styles have impacted your own. While they will not become a carbon copy of you, the behaviors you model will become part of their roadmap for life. When you model a behavior, they are likely to learn it.

What do they know?

Your kids don’t know everything you know.

Marital conflicts have a lot of moving parts. There is often backstory and unspoken, but important undercurrents that may play a role in how the fight should be interpreted. Our kids are not therapists; it is not their job to uncover and sort out this information. Listening to a fight without it, though, can leave our kids confused and jumping to wrong conclusions.

Also, keep in mind that if your relationship is going through a season of volatility where you toggle between having harsh, hurtful fights and making up, your kids won’t necessarily have the benefit of knowing when or to what extent you’ve made up. They may feel a constant sense of uneasiness and tension. Remember: the moment they were exposed to the fight they were included in the fight.

Let them be kids while they are kids

Your kids don’t need to grow up that fast.

Sure, there is conflict in the world. Sometimes it gets aggressive and mean. But be cautious about assuming now is when they need to learn all about it. Showing our kids counterproductive conflict now won’t immunize them from it later in life. As they mature and become adults, they’ll develop their own strategies for facing interpersonal difficulties, but for now, they need to feel secure in their home.

We have one chance

Our kids deserve our best behavior.

Isn’t it interesting that we will be very careful not to fight in front of other people at church, co-workers, or neighbors and friends, but we are less careful in front of our kids (who are presumably much more valuable to us)? If you’re like me, you love your kids so much you would give your life for them. Isn’t it true, then, that they deserve our best behavior? Sure, there will be plenty of moments where we fall short of that standard, but shouldn’t this be our goal?

We only get one chance to raise our kids. We won’t do a perfect job because we’re not perfect parents. But one of the ways we can give them the best shot at developing well is to help them feel that home is a place they can feel safe and secure. We do them a huge service by helping them feel that their family relationships are a source of stability and consistency. Keeping potentially anxiety-provoking conflicts off their radar screen might add a degree of difficulty for us as parents, but I think it’s worth it; don’t you?

[reminder]Do you think there are times when fighting in front of the kids is okay?[/reminder]