How to Use Evernote as a Digital Family Photo Album 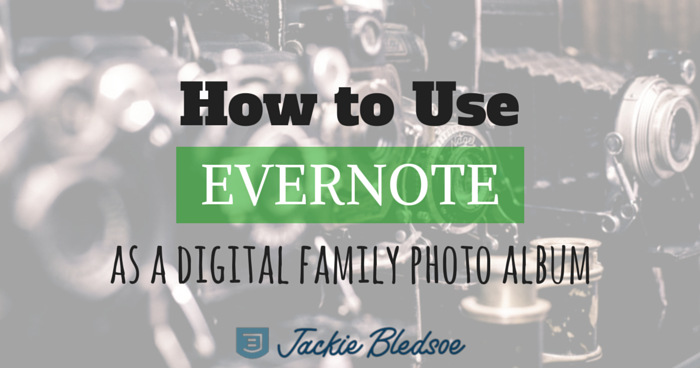 I take a ton of pictures on my smartphone. I’m sure you do as well. Smartphones have changed the game with capturing “Kodak moments” no matter where we are, or when we don’t have a lot of time.

That’s great, but my problem is I very rarely see those images again. Yes, some I upload to Facebook or Twitter and get a few minutes of “Facebook feel good” based on how many likes and comments I get. But for the most part, I never see them again.

It almost gets to the point where I’m like, why even take pics? I usually end up not really “being there,” in the moment because I’m focused on the best pic. Then later, I can’t even relive it via the photo because it becomes out-of-sight and out-of-mind.

There has to be a better way.

I think I’ve found a solution to this problem. I’ve written several posts about my favorite app, Evernote. I use this app everyday, practically all day. There are a kazillion different uses for Evernote, and I’ve shared at least 101 of them before, but this one, well, I never realized how powerful it could be.

I actually found the solution while shopping for sports equipment for my boys. I was in research mode, and every time we were in a store that sold youth baseball equipment, I’d take a picture of the item using my Evernote app. Then I’d tag it and enter some additional info about it, so I could compare to other items I saw at other stores.

It made it so much easier to quickly know if the youth glove I was looking at in Wal-mart was the same one I saw in Target or Dick’s Sporting Goods. Many of them looked alike, but sometimes they’d have one subtle difference.

I ended up buying a glove through Amazon that was the best price and quality glove we found. It was exactly what we wanted. Had I not been able to easily retrieve and compare that info, then I may have missed out, or thought there was something better out there.

So, what does this have to do with a family photo album?

Evernote as a family photo album? Yes, here’s how.

The family photo album uses the same concept. We take photos daily, only to end up not knowing where they are when we want or need them. So, instead of using my phone’s native camera app, I open up my phone’s camera through my Evernote app.

If I’m at an event with my family, I open the Evernote photo app, and snap away. Once I’m done, I tag the photos with as many or as few tags as I desire. The tag I always use is “Photos.” If there are pics of my wife, I make sure to include the tag, “Stephana.” If it’s our kids, I’ll tag with with their names.

Since I’ve tagged them all, when I want or need them later I can use Evernote’s search function. And this where Evernote shines.

After using this for a while, I’ve learned if I want to share a photo of one of our sons, Joshua, I can search for the tags that include “Joshua” and “Photos.” In seconds, I’ll have all the pics I’ve taken of him. I can drill down my search more and include “Baseball” or “Church” or “Baptism” and voila!

Why Evernote works better than other photo storage apps:

One reason is I can access Evernote on any device I own, on any platform, online or offline, if I choose. I own an Android phone, an iPad, and a Windows PC, and can open my Evernote on all of them.

My experience has been sometimes they don’t always play nice together. But since Evernote is cloud-based, the platform is not a problem. The same search functions work, the same access is afforded, and there aren’t any compatibility issues I’m aware of.

Another reason is I’ve run out of space on Dropbox because everything is in there, including all my DSLR photos, which take up a lot of space. Since I have so many photos for blogging, I had to upgrade to the larger Dropbox package, but I can see that space running out over time.

With Evernote Premium ($10/month) you have a limited amount of uploading you can do each month, but the next month it replenishes. So, as long as you stay within your monthly allotment, your storage can grow and grow to almost unlimited.

A really cool reason is Evernote supports integration with your calendar, and you can easily share it. The integration adds a cool little feature. Say I’m at my daughter’s play performance and I pull out my phone to take some pics (which I will be doing this weekend).

I already have a calendar appointment set in our Google Calendars. I have my settings configured, so when I create a new Evernote (for text, photo, audio, or other), it auto-fills in the location I have in my calendar as the note title. So, Jaicey’s Upon This Rock play performance becomes the note title.

This is great when searching later. In addition, it creates a mini-photo album of that event, which of course can easily be shared. If my parents want the pics I took, I can just share that Evernote with them. And they don’t have to have Evernote to view or save them.

Evernote is designed to help you remember everything, even your lost photos.

Evernote is an app I can use every single day, whether I’m taking photos or not. Since I use it regularly, I’m very, very familiar with it. I’ve listed a few ways you can use Evernote as your family photo album for smartphone pics, but with Evernote, your only limitation is your creativity.

Whether you are using another smartphone storage app to store and organize your pics, or using nothing at all, I encourage you to test Evernote. I’m loving it, and I bet you will too.

[reminder]How would being able to store and quickly retrieve your smartphone pics benefit you and your family?[/reminder]