How Far Will You Go to Put Your Family First? 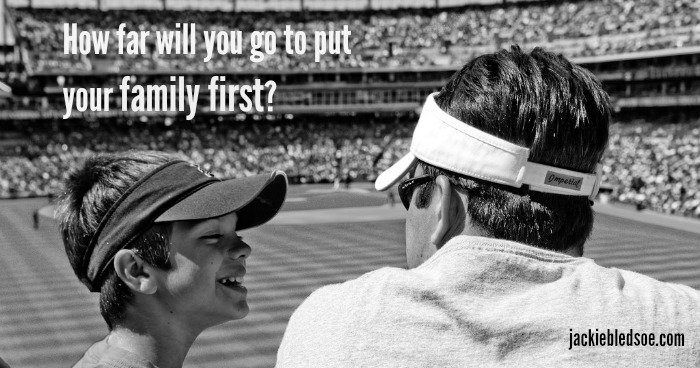 The past few days I’ve been following a sports story about a father and his son. If you’ve been too caught up in March Madness you may have missed it.

Adam LaRoche is, or was, a player for the Chicago White Sox, until he abruptly retired with a $14 million contract due to him this baseball season. The reason he retired? A White Sox executive asked him to bring his 14-year-old son around the team less often.

Growing up at the ballpark

From the moment I read the story last week, I have been intrigued and paying close attention. This hits home on all kinds of levels for me. I grew up at the ballpark. Not a major league park, like LaRoche’s son, but the little league parks not too far from my childhood home. I showed up to the park even when I didn’t have games. I can only imagine the experience it must be “growing up” at a Major League Baseball park.

After my little league days ended, I continued playing baseball for my high school before “retiring” to play basketball in college. Fast forward 15-20 years and I now coach my two sons, who are spending a lot of time at the ballpark much like I did as a kid.

So, I truly relate and understand why Adam LaRoche has made this choice, although there are some people who disagree with his decision to quit and his decision to have his son on the field and in the clubhouse every day.

For the love of…

Adam loves baseball. Adam loves his family and he loves being a dad. He has two of his greatest loves together every single day. He was blessed to have a career that allowed this. Not many people get this opportunity.

For those not familiar with a Major League Baseball schedule, it is a grinding six months with a lot of travel time away from family. For a player with a family and kids, it’s possible to miss a lot of your kids growing up and many of those important life moments.

When Adam was asked to have his son around less often he decided that was not an option he wanted. That had to be a tough decision, even though it seemed like he made it very quickly. I’ve thought about it over and over again and I’ve come up with a few valuable insights for us to note.

Walking away from $14 million is not a decision to take lightly, or make rashly. That’s a decision that takes time. I’m sure you agree. Based on what I’ve read, Adam came to his decision in less than 72 hours, maybe less than 48 hours. How did he make such a decision so quickly?

The only way I see that being possible is he had a very good understanding of what his priorities were, and what was most important to him. Putting family first was his priority.

The clearer we are on what is important and what is a priority, the quicker and more confident we can be when making decisions—even unpopular decisions that others may not understand.

The clearer we are on what is a priority, the more confident we can be when making decisions.

2 – Take care of your business

I’ve made the decision to walk away from money on multiple occasions, and I noticed something. The more secure our finances were the more comfortable I was with walking away.

I’m assuming Adam LaRoche and his wife have managed their money well and have adequate savings, investments, and businesses (he is co-owner of a company affiliated with Duck Dynasty’s Phil Robertson), so they can still live the lifestyle they’ve been living with or without that $14 million contract.

Whether right or wrong, Adam LaRoche made a decision to put family first. A bold decision. Even when you take the amount of money off the table and view this through the eyes of a regular employee (not a pro athlete), that is pretty bold. It’s not my arena to say he was right or wrong, or to say the White Sox were right or wrong.

No matter what decisions you are faced with today, I encourage you to be bold in making them. Do your homework, dot your “I’s” and cross your “T’s”, then make the decision you feel is best for your family.

[reminder]What are your thoughts on Adam LaRoche’s decision and/or the insights I’ve shared above?[/reminder]