About a month ago we received a call from our daughter’s talent agency asking if our family would audition for a TV commercial. We were super excited and of course, we said yes! However, there were no guarantees we’d be selected. 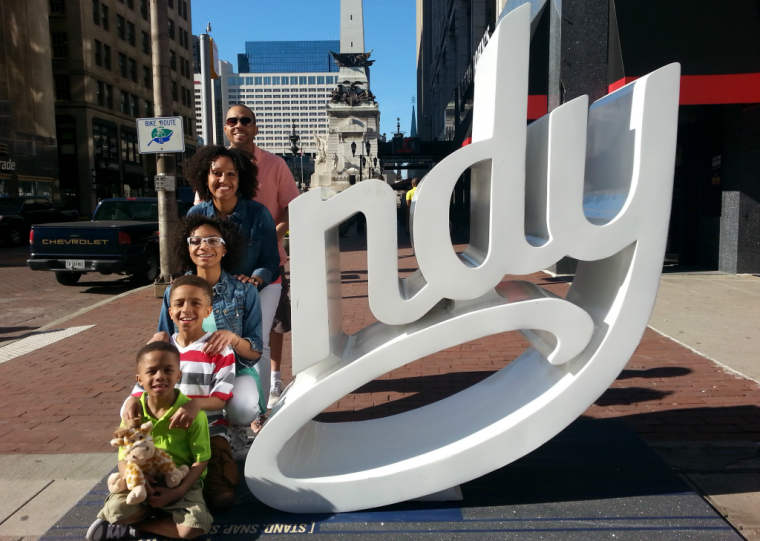 So, a few weeks later we were called back as finalists. And then we received the call we’d been waiting for. Our family was chosen to “star” in the Visit Indy commercial as part of Indiana’s Bicentennial celebration. The commercial began airing this week on major TV stations in Indiana.

An awesome and unexpected experience!

If you told me 10 years ago that I’d be in a TV commercial with my wife and three kids I’d laugh at you and probably think you’d been consuming something you shouldn’t have. But here we are today, “starring” in a TV commercial, which actually happens to be only one of multiple commercials that we’ve filmed as a family.

All of these experiences have been pretty cool and pretty unexpected. The day the Visit Indy commercial first aired we were actually filming another commercial that was completely unrelated. So, this week I’ve been thinking a lot about it all.

In addition to all the fun and “coolness” of being in a TV commercial, I’ve discovered some insights and lessons that can help you really enjoy spending time with your family, even in the midst of challenges.

If you’ve never been to Indiana, or just want to visit Indy again, this year during Indiana’s Bicentennial celebration is a great time! Click here to get ideas for a Spring & Summer Getaway to Remember!

Our Visit Indy commercial is only 30 seconds. But that 30 seconds was a 13-hour work day for our entire family. We arrived at the first shoot location at 6:30am. If you have kids you know how tough it can be to get up, get dressed, and get your family somewhere before the sun comes up.

Not only did we have to arrive by 6:30am, we had to have multiple outfits and shoe options for every member of our family. We packed up suitcases and our car like we were going on vacation!

But once we arrived and went to work it was fun. The day started at a hotel in downtown Indianapolis, then we went to a local pizza place and pretended to have a birthday party for our 6-year-old. Next up was a trip to the museum and downtown canal where we enjoyed the sites and eventually rode around on Surrey bikes. Last, we went to the center of downtown and ate ice cream while sitting on the monument steps.

You might be thinking, “Of course you had fun, look at all the fun stuff you did.” True, but I haven’t mentioned all the wardrobe changes, which required unpacking and packing the suitcase over and over again, and changing in public bathrooms, and sometimes in the car before driving to the next shoot location.

Under normal circumstances when all that was occurring we may be at each other’s throats, frustrated, impatient, and just plain rude to one another. We’ve done that before. But this day we chose over and over again to enjoy one another’s company despite all the busyness and challenges we had through the day.

Sometimes you have to roll with the punches

When we were chosen for the commercial, the agency said our youngest son may not be included. I’m big on doing things as a family, all of our family, so that didn’t sit well with me. I initially told my wife to email them back and let them know we are a package deal of five. If Joshua cannot be in it, then we decline. She wisely convinced me to reconsider and explained that in this business sometimes all of us or some of us will be needed.

I agreed and we rolled with it. We weren’t assured that all five of us would be in it until a few days before the shoot, which was a big relief as we weren’t sure how Joshua would have taken not being included. Then on the way to the first location he asked, “When are we going to have my birthday party?” His birthday is in November and this year, we did a small family-only birthday party for him, so he felt like he had no party.

Well, when we arrived at the shoot, we discovered that almost every scene had Joshua as the focal point. The commercial was built around a family making a visit to downtown Indianapolis to enjoy all it has to offer. It was set up like a birthday celebration for guess who—yep, for Joshua! He even got a small cake and some gifts, which he got to keep. So, rolling with the punches ended up better than we even expected.

Others know if you enjoy your family or not

A couple weeks after we filmed the commercial, Stephana had a conversation with one of her friends whose husband was part of the filming crew. While we were working and interacting with one another throughout the day he took notice. As I said before, with all that was going on there was the potential of a long and challenging day for our family.

But what he shared with his wife, who then shared with Stephana, was so encouraging. In fact, what he said was something every dad and mom wants to hear. He said our family really looked like we enjoyed being together. He mentioned how that is not always the case when families work together in situations like this. The commercial shoot was great, seeing us on TV and on the web is great, and getting paid for it all is really great, but his comments might be the best thing of all.

Getting the opportunity to spend time with your family and really enjoying that time together is one of the greatest blessings we can have. We didn’t set out to make a point about this. But because my wife and I have made leading and loving such an important aspect of our family life we were able to encourage someone else.

Spending time with your family and enjoying that time is one of the greatest blessings we can have.

So, be encouraged and let the story and insights shared in this post work themselves out in your family life! Commercials aren’t guaranteed, but enjoying family life is guaranteed to be worth more than any commercial or anything else you can do for your family.

Question: Does your family enjoy spending time together? You can leave a comment by clicking here.

If you’ve never been to Indiana, or just want to visit Indy again, this year during Indiana’s Bicentennial celebration is a great time!
Click here to get ideas for a Spring & Summer Getaway to Remember!
Comment0 | Share | Tweet | print | email