A Plan for Having Successful In-Law Relationships 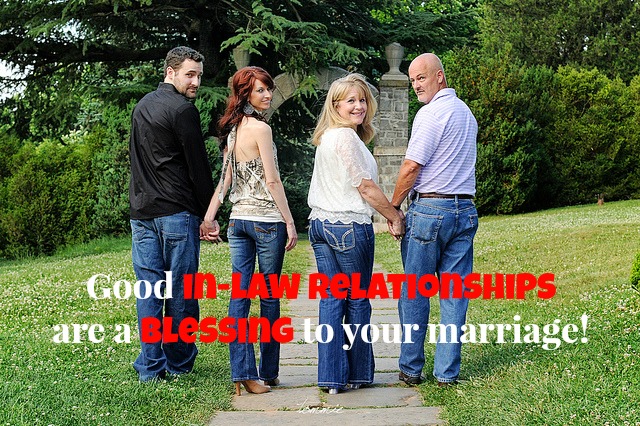 This is a guest post by Kevin Bullard of Marriage Works!, a site dedicated to helping create more healthy marriages and functional families. In this guest post, Kevin shares a story someone shared with him about a difficult in-law relationship and how it impacted their marriage. At the end of the post is a special offer for you. If you want to guest post on my blog, check out the guidelines and submit your post.

After an unforgettable romantic whirlwind, Lisa was so ready to become Mrs. Bradley Jones.

Although their courtship lasted less than a year, no one was surprised when she announced their engagement to her family and friends. If you had seen the way he looked at her, you could tell he adored her. It was obvious to everyone around them that were meant for each other.

Being hurt on your wedding day

Lisa’s wedding day was supposed to be the most memorable day of her life. And it was. But one memory from that day still hurts years later.

While the wedding party prepared for the ceremony, Bradley’s mom, Angela, told everyone in the church about the girl her son “should’ve” married.

Crazy, right? Who does that?

Under attack in your own home

Not long after that, Angela “informed” Lisa that her cooking would never be good enough for Bradley. “He really wants to move back home with me,” she claimed.

Lisa never knew quite how to bring up the subject with Bradley. He tended to be over-protective of his mother. So she kept it to herself, fought back the negative feelings and tried to be civil.

As months went by, Angela continued her sneak attacks on Lisa, and Bradley never seemed to notice (or was he just unwilling to stand up for her by confronting his mother? Lisa wondered). She began to resent him. “If he won’t put me before his mother, maybe he doesn’t love me like I thought,” she thought to herself.

How are your in-law relationships?

Can you relate to this story? Are your in-laws are attacking you? Worse, does it seem like your spouse is refusing to defend you–or even acknowledge your feelings about the situation? Do you long for peace?

It took 4 years of tension before Lisa decided to tell Bradley everything. That conversation began a chain reaction of reaffirmation and reconciliation between husband and wife. Only recently have they begun to learn about God’s plan for dealing with difficult in-law relationships like the one with Angela. The transformation hasn’t been perfect, but things are beginning to move in the right direction.

What about you? Would you like to know what God has said about in-laws (other than “Thou shalt not kill”)? Could you use some help in repairing damage done because of long-standing tension caused by extended family?

A plan for having successful in-law relationships

If so, you’ll be interested to know more about the online conference my wife, Cetelia, and I are hosting this Friday and Saturday, January 31st & February 1st. The conference is called, God’s Plan for Building a Successful In-law Relationship. Find out more here.

Early bird pricing ended Monday, but I’ve agreed to give readers of Jackie’s blog a discount on the conference fees. When you register, enter promo code “JBJr” and you’ll save 15%.

Please share the things that have helped you have successful in-law relationships below in the comment section.