I recently wrote an article about rubber wedding rings after seeing an NFL player wearing one on HBO’s show Hard Knocks.  The company which sells the wedding rings somehow discovered my article, contacted me, and offered to send me some rings. 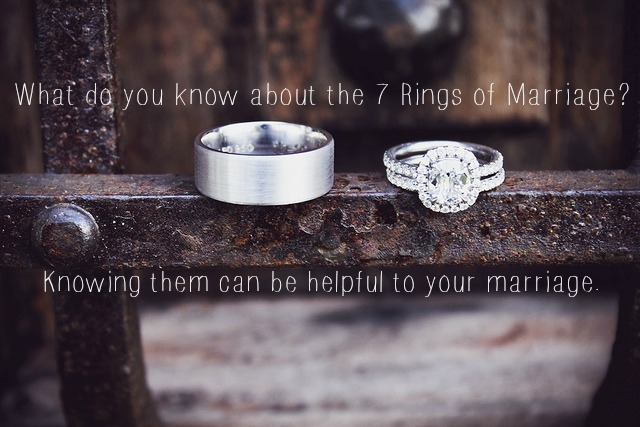 A couple weeks later a package arrived.  When I opened the package I was surprised to see they didn’t send a couple, they sent like 12 wedding rings!

Have you worn multiple rings?

Of all the rings they sent, I can only wear a few of them as some are too large and some are too small (my wife wanted to wear the smaller ones to match her man).  Of course, no matter how many fit me, only one wedding ring needs to be worn at a time.  But it has me thinking about the different rings we wear in our marriages.

Just like I have several rubber wedding rings, my marriage has gone through a few wedding rings itself.  Not because I’ve been divorced, or have another wife and family out on the west coast (some people do that you know).  And I’m not talking about physical wedding rings, but different rings, or stages, of marriage.  Some stages have been good, some have been not-so-good, and others have been down right rough!

Become familiar with the 7 rings of marriage

You may have noticed something similar in your marriage.  Maybe you are concerned because you don’t know what phase is coming next.  But if you knew what to expect you could prepare for it, and handle it better.  I was caught off guard by some of the rings of marriage.  My hope is you don’t get caught off guard like me.  Becoming familiar with the 7 rings of marriage will help you.

Click here for a free infographic of the ‘7 Rings of Marriage’ and see which ring you are wearing right now. Plus you’ll receive updates about my highly anticipated book, The 7 Rings of Marriage: Your Model for a Lasting and Fulfilling Marriage.

14 thoughts on “What Do You Know About the 7 Rings of Marriage?”