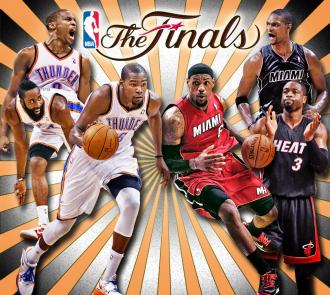 Last night the Miami Heat beat the Oklahoma City Thunder to take a 3-1 lead in the NBA Finals.  The Heat are “one more game” away from winning the championship that LeBron James so desires.  I am sure the Thunder want more than just “one more game“, but that will only happen if they win tomorrow night.

Before yesterday’s game I was playing “P-I-G” with my son, Jackson (P-I-G is a variation of the H-O-R-S-E basketball game).  We were playing a series of 3, so the first person to win 2 games was the champion.  Well I beat him 2 games to 1 game, but something interesting, yet predictable, happened next.  We had already agreed to play a series of 3, but despite that he asked me to play “one more game.”

Agree To Play “One More Game”…

Of course, I agreed, and beat him again.  What do you think he said after that game?  Yep, “one more game”, so we played again.  This went on for one or two more games, with each game being tougher and closer, before he finally beat me.  Once he beat me you can guess what happened.  He was satisfied in beating me the last game so we called it a day.  As I thought about it, I noticed a few things that happened in our “one more game” agreement.  I think we should have a similar mentality when it comes to accomplishing things in our life.  Here are 5 Things That Happen When You Have A “One More Game” Mentality.

That is what I want for all my readers.  I want us all to win.  Some will win sooner than others, but all of us will experience some losing situations.  I encourage you to request “one more game”, until you accomplish what you set out to.

Question: When have you used the concept of “one more game” to accomplish something? Please share in the comment section below.