Lessons From an Olympian, and a 6-year Old Learning How To Ride a Bike 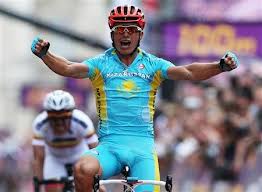 I posted some ideas of how to enjoy the Olympics with your family, and we’ve had some fun moments so far. One thing that we enjoyed was watching the Men’s Cycling Road Race together on Saturday.  This race is an almost six-hour, 250-kilometer race through the city streets.  No easy task.  Fortunately we were able to see the last 30-45 minutes of it, and the most exciting part (no, we didn’t sit through 6 hours of bike racing!).

What we witnessed at the end was a great lesson for us all, and a refresher on a lesson that our son just learned while riding his bike.

When we first removed the training wheels on our son’s (Jackson) bike, he was not too happy.  He was completely comfortable riding with the safety of four-wheels.  The risk of riding and falling was greater than any reward of riding on two-wheels to him.  Our family really enjoys bike rides, and it got to the point where we could no longer enjoy them because he refused to go.  So only part of the family went.

After having enough of that, we realized we had to help him overcome his fear, by making him face it.  We decided to practice for 15 minutes every single day until he learned.  Well two days after that, he was riding on his own.  Two weeks after that he is riding over 4 miles up and down hills in the state park.  How did that happen?

In addition to facing his fears, one important lesson he learned was to focus on where he was going. When he first began he watched the pedals and the ground, and was very unstable and unbalanced.  Once he began to focus on the point, or object, that he was trying to reach he got stability and balance.  Finally, he overcame his fear through focus.  And he now thoroughly enjoys the freedom and fun that comes with riding a bike…on two-wheels! 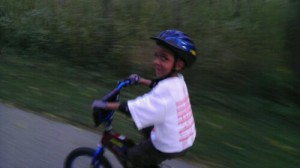 Jackson is too fast for my camera. He’s a blur! 🙂

Shortly after we tuned in to the Olympic Road Race, there was a crash by the leader of the race.  This enabled two cyclist to get and hold a substantial lead on the rest of the pack for the remainder of the race. Leading was Uran of Colombia, and close behind was Vinokourov of Kazakhstan.  I noticed while watching that some riders frequently looked back over their shoulder while riding.  Uran seemed to do this often.

As they entered the final straightaway, with the finish line in sight, about 300-400 meters away, Uran of Columbia took his eyes off the finish line, and took one more glance over his shoulder.  You can guess what happened next.  As he glanced over his shoulder he began to drift and slow just a little.  Vinokourov took complete advantage, and pedaled his hardest to pass Uran and take the gold medal.

How does this apply in your life?

We all have something we fear.  In the case of my son, the fear was falling off his bike.  The Olympian feared being passed.  How they handled that fear is what made the difference, allowing Jackson to successfully reach his goal while the cyclist failed to reach his.  Your fears may be not having the resources to meet your family’s needs, losing your job or home, taking action on your dream or telling others about it, starting a new business, or health concerns.  How you handle your fear, will make the difference in your life.

Question: What can you focus on today, that will help you to reach the goals for you, your family, or your career?  Please share in the comment section below.