How Your Marriage Can Survive After an Affair 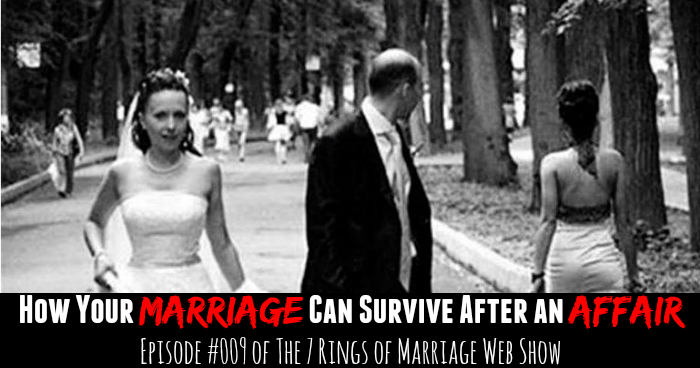 Honestly, it’s something I hope I never have to face. Last night on the 7 Rings of Marriage Web Show we interviewed Justin and Trisha Davis. They’ve experienced infidelity in the marriage and their marriage survived to tell about it.

Since restoring their marriage and putting the broken pieces and hearts back together, they’ve committed their lives to using their story to help other couples avoid what they’ve experienced, as well as to help those who have experienced infidelity recover.

While I wish they’d never experienced it, I’m thankful they’re sharing their story. Listening to them was a gut-check for my wife and I as well as the couples who joined us on the show last night.

You don’t plan for an affair, but it doesn’t just happen

Justin and Trisha of course didn’t plan to have infidelity rock their world, and as Justin shared on the show, even 6-months prior to it happening he would have thought it out of the question, but it happened.

In this episode you go through the 7 Rings of Marriage through Justin and Trisha’s marriage story. If you ever experienced a major challenge in your marriage you’ll benefit greatly from hearing how they went through the RestoRING to get their marriage to the point of ProspeRING and now MentoRING other couples.

What you’ll learn in this episode:

Watch all nine episodes and more!

Sign up to so you can watch the past nine episodes as we make them available. And each week you’ll be notified of the upcoming episode, guests, and other 7 Rings updates for my book, marriage courses, and speaking engagements. A new episode airs live each Sunday at 8:30pm EST.

Additional resources to help your marriage

In this episode we mentioned a few resources which will help your marriage. Check them out below:

[reminder]What action can you take today to prevent an affair?[/reminder]