Find a Physical Activity You Enjoy and DO IT! 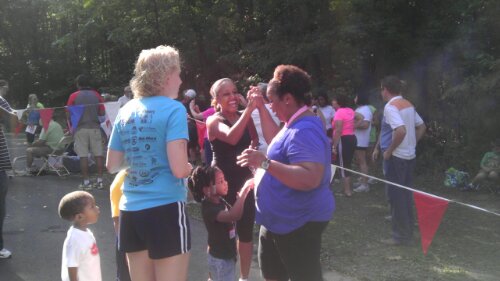 My wife competed in her first triathlon today! She did not compete in each phase, but she was one member of a team of three who tag-teamed the event.  She completed the cycling stage of the event, and I am happy to say she thoroughly enjoyed it!

#GETActive Sooner Rather Than Later

Recently I’ve been asking my wife to run with me, and we recently began to do so in the mornings.  While I have been asking her to run with me just recently, she has been asking me to ride bikes with her for over a decade.  While we were dating she bought a bike and I was suppose to buy one so we could ride together. Last month I finally bought a bike, actually she bought me a bike at a garage sale, for $5! Bad husband, I know!

Living Active Lifestyles and Having Fun!

Since then we have gone on several bike rides with the kids and some without the kids.  She has loved each and every ride.  Today, she got up earlier than she normally does so she could compete with her team in the triathlon.  When she was done, she was glowing!  She not only wants to do it again, but she is actually considering seriously competing in some cycling events.

Key to Living Active…Find Something You Enjoy!

So now we will begin her “training” to compete for fun and for “real” in future cycling events.  The beauty of it is not that she will be competing, but that she will be living a much more active lifestyle while training to complete more events like these.

In addition, our daughter was inspired and said she would like to swim.  I enjoy running and running events, so you may see “Team Bledsoe” competing in a future triathlon somewhere.  I encourage you to find a physical activity you enjoy begin doing it regularly.

Question:  Have you competed in a running, cycling, or swimming event, or do you desire to? Please share it in the comment section below.