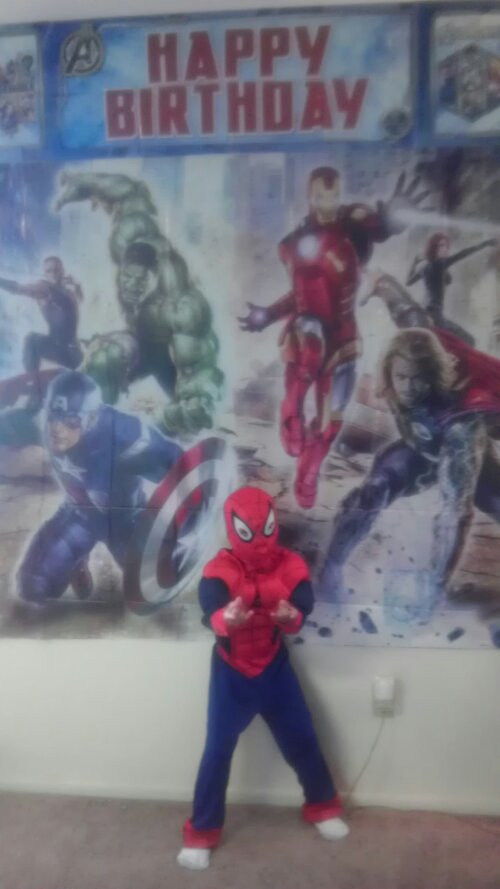 Today is my son’s 7th birthday.  As every parent thinks of their own child, I think he is pretty AMAZING.

(I am writing this post on the go, and not thoroughly editing. So you may find errors, well more errors than usual. {smile})

My son loves super heroes, just as I did at his age.  He especially loves The Avengers and (Ultimate) Spiderman.

My wife and I say his like of super heroes fits him perfect, so we call him “Ultimate Kid.”

One reason we call him that is because everything he does he goes all in.  When he is happy, he has that uncensored joy.  When sad, he is super sad.  When excited, his excitement is almost uncontrollable.  He is ULTIMATE Kid.

We have been blessed by him in so many ways.  In addition to his ULTIMATE Kid super powers, he has a huge heart, and is always thinking of others.  That big heart of his was a concern for seven years ago.

When my wife was pregnant with him we went in for the routine ultrasound.  The ultrasound revealed a calcification on his heart, and a spot on his kidney.

We learned that this indicated a higher risk for him to be born with down syndrome.  The doctor was not the most compassionate about it.  Let me say it, he was pretty rude, really crass when he shared this with us.  It devastated my wife.

The remainder of the pregnancy was very stressful, and additional complications came about which ruled out a natural birth.  A C-section would be scheduled.

Scheduled for November 1st, earlier than the due date due to the complications, we went to have him come into the world.

What I am about to say next I have never told anyone, except my wife.  When he was brought out of my wife (via c-section), the umbilical cord was wrapped around his neck.  His body was lifeless.

My heart either stopped, or raced at breakneck speed.  I don’t remember.  The doctors were calm, but quickly unwrapped the cord from his neck.  Seconds later he began to move and cry.

I am almost certain had he born naturally, and the cord been wrapped around his neck the results could have been much different.

The next few days while in the hospital multiple tests were done on him.  Some normal, and others due to some of the complications discovered during the ultrasound.  All tests came back negative.  No spots, no calcification, and no down syndrome.

So, in addition to our son’s amazing kid-like super powers, he is the ULTIMATE BLESSING to us, and we are so glad to wish him a HAPPY 7th BIRTHDAY!!!

Question:  Will you join us in wishing our son a happy 7th birthday?  Please share your birthday wishes in the comment section below.